Eli D Greenberg to bring "transparency" Riedel: How A Clash with Iran Could Destabilize Afghanistan

Some of those championing Caster Semenya’s cause accuse those wanting to sex-test Caster of imperialism and racism (as well as sexism). Others plead to wait before reaching a verdict, arguing that the realities of sex testing are enormously complex

Firstly to address the issue of terminology, over which there seems to be confusion. Gender is the dominant society’s views on how women and men should look, behave, what roles they should play in society, how they should perform and frequently what rewards they receive – hence gender inequity. This has usually led to lower status and discrimination against girls/women but has increasingly been seen as limiting the options and potentially harming boys/men too.

Gender is not a politically correct term for sex. Sex testing would be just that – establishing whether a person is biologically female or male. So gender testing is not the term that should be used this case, but sex testing.

Secondly, to tackle the science issue, as this tends to obscure the real issue of gender stereotyping and discrimination so evident in this case. Professor Tim Noakes, an international sports science expert says the issue of ‘unfair advantage’ which is the only thing that should be at play here as it is in the case of drug use,is simple to establish.

He states that the issue that needs to be clarified here is whether the person concerned is a man masquerading as a woman or not. This could be established by a simple physical examination “handled within the usual constraints of the doctor/patient domain – not in the public domain” as has happened in the harmful manner in which the IAAF has handled this.

As for the rest, he says, there is great variation. All other possible tests including chromosome testing is indeterminate and so that should be left well alone. The calls for more to be done in dealing with
this issue and await judgment are therefore erroneous and cloud the issue in a shroud of inappropriate so-called scientific enquiry.

The third issue relates to what lies at the heart of the matter, social norms. While issues of racism and imperialism have and will continue to apply in various circumstances and have a sensitive history in terms of
women’s bodies, particularly in Africa, focusing on these issues in the current context obscures the much neglected ‘elephant in the room’ - gender discrimination. Comments within the press and on talk shows are
unwittingly guilty of this same problem in placing ‘blame’ at Athletics South Africa or her coach’s door.

They argue that the authorities should have pre-empted this situation, given her prior experiences (at the hands of the teachers, members of the public and previous authorities). ‘Pre-empting the situation’ would fall prey to the exactly these same prejudices – pandering to what people perceive to be ‘normal’ for girls or women.

This is akin to what might have happened during the apartheid era where actions may have tried to stave off racism by negotiating black people’s entry into racially reserved sporting or cultural events before the
time.

Many white girls who do not ‘look’ as society expects will tell similar humiliating stories of being stopped from entering female public toilets or being questioned as to whether they male or female.

At the core of this issue are ideas about gender – how girls/women and boys/men look and behave and perform (in this case perhaps a young woman winning by 2 seconds ahead of the field is not seen as ‘normal’).

This is what has been so hard to address locally in South Africa, despite our progressive constitution, due to deeply held dominant ideas about what is ‘female’ and ‘male’. It is these ideas and actions that promote gender discrimination. This leads to men, who in societies’ terms do not look ‘masculine enough’, being called ‘sissies’ and women who look not ‘feminine enough’ being labelled ‘butch’.

At the root,  gender discrimination

In our own society, this has led to violent attacks on some women and in our own and other countries to violent attacks on some boys/men. This is what we need to clearly point as underlying this case and name it for what it is. Framing the discrimination as racism or imperialism without reference to gender discrimination as the main issue risks reinforcing gender stereotypes.

Societies have a long way to go in terms of changing the dominant ideas on how women and men should look and behave and perform, and in some cases, dress – and allow for variations in ‘looks’ and roles to be
underpinned by what people would like to be and do, rather than societies’ current dominant expectations.

There are many excellent organisations in our own country and abroad that have worked with women and men on this issues, but as it is all to obvious from this and other cases, much work is still needed for these choices and this freedom to take root in the broader society as a whole. 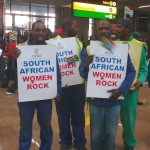 Caster should not be having to deal with a world controversy over her win. She should be unreservedly basking in the glory of her and our incredible victory. No doubt she has experienced this humiliation and discrimination at other levels before and has become somewhat hardened to its effect, but we wish her, her friends and her family strength in dealing with this blatant gender discrimination.

As Caster Semenya and our other gold medal winner, Mbulaeni Mulaudzi, return home – congratulations on your amazing wins and Caster, you have our ful lsupport. For the rest, to Caster’s detractors or apologists, hang your heads in shame for not ‘naming’ the issue for what it is and for perpetuating gender stereotypes and discrimination in her individual case and in society as a whole.’

As we once again approach the 16 days of activism against violence against women, let us bear these issues in mind and not mouth platitudes in our struggle against gender inequity and discrimination.