by Mitchell Plitnick Once upon a time, it seemed that the Obama administration had held off opponents in Congress as well as pressure from Israel in order to press forward with negotiations with Iran. It seemed that President Barack Obama’s penchant for diplomacy was finally bearing fruit and that the United States and Iran were 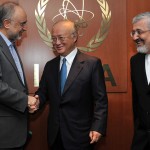 I was still a serving diplomat in Vienna when, in January 2006, the International Atomic Energy Agency (IAEA) reported that Iran had resumed uranium enrichment, suspended since November 2003. Like my Western colleagues, I feared the worst. I assumed that Iran was going to install as many centrifuges [...]

Despite the misleading headline, which says Iran has a “nuclear weapons program” even though no reputable assessment exists to support that claim, Haaretz is reporting hat Israeli defense and intelligence officials have high confidence in an International Atomic Energy Association (IAEA) finding that Iran’s enriched uranium is going into medical research:

Daryl Kimball, executive director of the Arms Control Association, offers a critique of the bipartisan senate resolution to be presented on Thursday, which pressures the Obama administration to rule out containment options for Iran and limits diplomatic options. Writes Mr. Kimball: