EU Showdown: Greece Takes on the Vampire Squid Shelter from the Storm – report 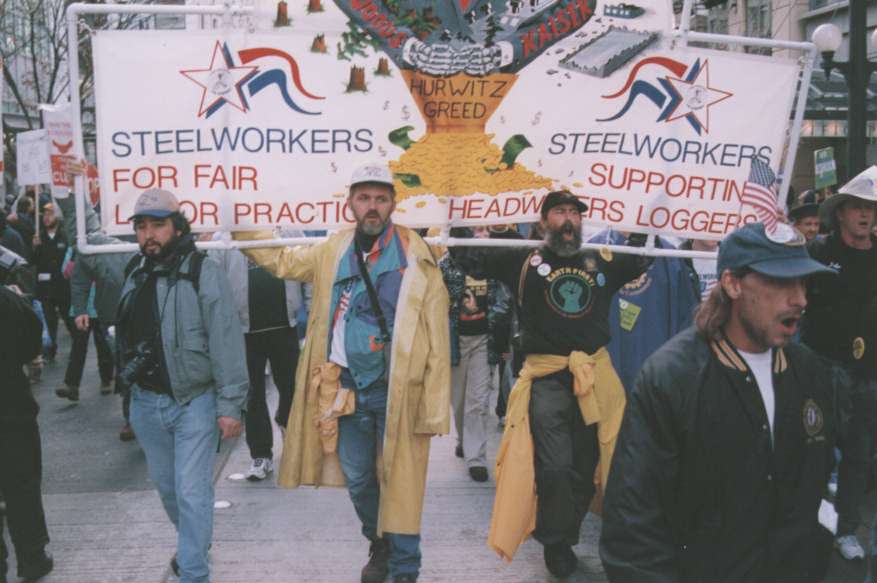 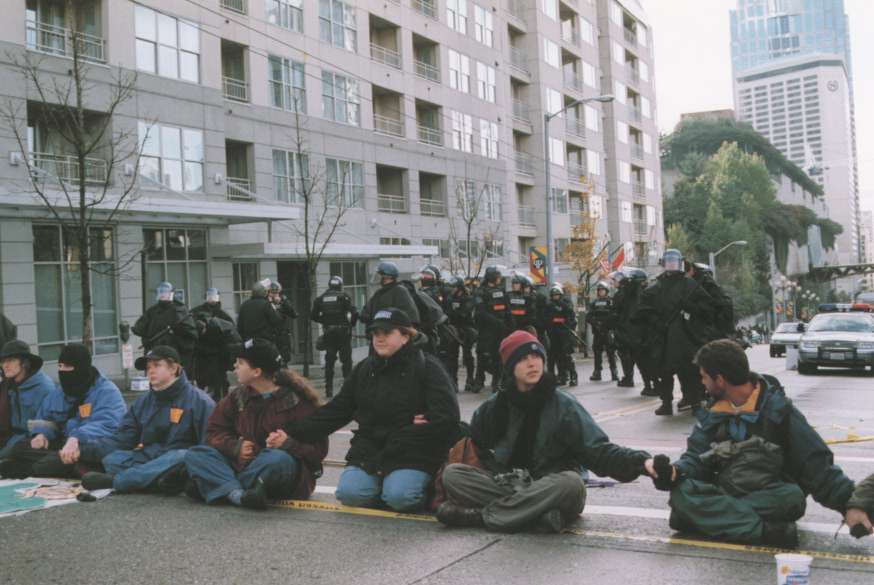 One afternoon during the 1999 Seattle Ministerial of the World Trade Organization, the police and the Black Bloc were mixing it up on Pike Street amid clouds of tear gas. As I retreated from the front lines, I heard music and looked up. On a balcony high on a condo tower, someone had cranked up a big sound system, and Jimi Hendrix was shredding “The Star-Spangled Banner” over the suddenly mean streets.

The Wall Street Journal called the event “the Woodstock of antiglobalization”. But the WTO protests were far more than just a counter-cultural jamboree. This time around, it was the WTO organizers, Clinton administration officials, and City of Seattle hosts who must have felt like they had dropped some of the bad acid.

The Battle of Seattle, for which the volunteer DJ provided an ironic sound track, can’t be reduced to a couple of hundred black-clad, masked “anarchists” breaking a few storefront windows, or the police pepper-spraying peaceful demonstrators.

Jimi’s fuzz, feedback, and howling riffs rocked the zeitgeist of a historic inflection point: the implosion of a market-fundamentalist model of globalization pushed by the richest countries and transnational corporations. On the streets and in independent forums, it was represented mainly by a convergence of labor, environmental, public-health and democracy movements from the far corners of the world, many of which rarely had a chance to dialogue in person. Their march of at least 40 thousand people was complemented by artful and effective civil disobedience by thousands more, who managed to non-violently shut down the planned opening of the Ministerial.

What was not apparent outside the Convention Center was that inside, many delegates from developing countries and opposition organizations were inspired by the energy of the streets. They brought to Seattle many long-standing grievances against aspects of the WTO model. But the protests emboldened some to stiffen their resistance to the hosts’ heavy-handed insistence on an expanding agenda of trade orthodoxy.

I covered the festivities as a member of a team of four journalists writing for Inter Press Service, a global non-profit newswire based in Rome. Abid Aslam had been covering international institutions and economics for many years, and was able to buttonhole delegates and observers from developing countries by name and sit down with them for coffee. Danielle Knight was a veteran chronicler of international environmental issues. Casey Nelson, my nephew, was press-ganged into serving as our photographer, and did not flinch as he gamely dodged the stun grenades.

Below you’ll find links to the articles that we sent out on the IPS wire and a few not published there, along with two retrospectives written on the 10th anniversary in 2009.

The protests against the WTO unleashed flash floods of creativity. The most visible symbolism was probably the two big banners by the Rain Forest Action Network hung from a construction crane, one an arrow labelled “WTO”, the other an arrow labelled “Democracy” and pointing in the opposite direction.

One of my favorite exploits, though, involved 484 pounds of Roquefort cheese. French farmer José Bové, the crusty leader of the Confédération Paysanne (Peasants Confederation), reportedly smuggled it into Seattle and gave it away to passers-by outside a McDonald’s to dramatize what he saw as a particular injustice of the WTO.

Bové had won notoriety in France for driving his tractor into town and using it to pull the roof off of a McDonald’s under construction. His battle cry was “McDo dehors, vive le Roquefort” – “Out with McDonald’s, long live Roquefort cheese”. His WTO action, though, went beyond simple outrage at an affront to French gastronomy.

The European Union had banned beef treated with growth hormones as a threat to consumer health. However, such hormones were approved and commonly used in the U.S. The U.S. government rejected the ban as a trade barrier, brought a complaint against it in the WTO dispute settlement body, and won a judgement that allowed it to slap punitive tariffs on certain European food products, including Roquefort.

Bové was channeling the ire of many European consumers at the use of the WTO to shove down their throats a controversial agribusiness practice that they saw as unhealthy, and the results of which they had democratically decided they did not want to consume. Beyond the immediate issue, this case was emblematic of numerous efforts to use WTO provisions to roll back labor, human rights, environmental, consumer and health regulations in many countries, especially poor ones, in order to protect the profits of powerful exporters and investors and preserve the economic dominance of the wealthiest countries and enterprises.

Criticisms of the WTO at the Ministerial also targeted some tactics used by the WTO leadership and the biggest members to strongarm small, developing counties into accepting agreements expanding the scope of the trade organization.

“Green room meetings” were relatively small closed meetings of representatives of certain member countries hand-picked by the WTO leadership, tasked with reaching a preliminary agreement before taking it to the full membership. Many of the poorer countries saw them as a ploy to circumvent their participation in democratic decision-making on controversial issues.

On the final day of the Ministerial, I was sitting with Abid in the press room when someone came in and whispered something to one of the other journalists. The word quickly circulated that Director General Michael Moore and U.S. Trade Representative Charlene Barshefsky had convened a secret last-gasp green room meeting, inviting only selected U.S. allies, in hopes of approving a closing statement that they had drafted. We suspected that this might announce agreement on launching the new round of trade negotiations they were promoting.

A stampede of ink-stained wretches, the two of us included, thundered towards the conference room on another floor of the Convention Center where the meeting was going on. The organizers refused to let us in, and called security to hold us at bay. Testy scriveners banged on doors and walls and chanted loudly, bringing a little of the atmosphere of the streets into the suites. Finally, the meeting conveners relented and let us in. They had failed to reach the agreement they sought, and there was nothing left to conceal from us. The high drama of what was billed as an epoch-making conclave ended with a whimper of crestfallen officials and without a new round of trade talks.

The failure in Seattle to reach agreement on the expansion of the WTO through ongoing talks set a precedent. Each following ministerial failed to convince many of the developing countries, and many political forces within the industrialized countries, that the WTO was a fair forum for protecting their economic interests, reducing poverty, and fostering broader development. With the conflicts that flashed over in Seattle simmering unresolved, the next round of WTO negotiations never took place and the WTO was never expanded.

Ten years later, WTO Director General Pascal Lamy acknowledged that “Trade liberalisation has transition costs and not all segments of society reap the benefits of it. … Trade liberalisation creates winners and losers.” Beyond trade per se, the WTO and similar agreements have also drawn widespread criticism for creating incentives for unbridled foreign investment, enabling transnational corporations to strip away national and local safeguards for labor, the environment, and consumer protection. Rather than encouraging trade, these provisions promote outsourcing of jobs and a global race to the bottom on public regulation of corporate abuses.

The Trans-Pacific Partnership, the WTO’s regional progeny, was widely viewed as an effort to create a trade bloc to woo some Pacific Rim countries away from Chinese economic influence. In the U.S., however, significant forces across the political spectrum rejected the proposed agreement. President Donald Trump withdrew the U.S. from the TPP in 2017, and it is now defunct.

Beyond the TPP, Trump’s use of extortionate tariffs to launch trade wars with U.S. partners has effectively rendered any trade agreement signed by the U.S. a dead letter. He has demonstrated that the most powerful nation can simply ignore a basic premise of all trade treaties – negotiated settlement of disputes – and revert to 18th Century mercantilism in an effort to beggar its neighbors. So far, this does not bode well for the U.S. or world economies.

Despite these setbacks, the immense juggernaut of corporate-led globalization rumbles on, with or without trade agreements. A new effort to bring the digital economy – and particularly data, the new e-gold – under transnational corporate control has been proposed as a new “e-commerce” treaty within the WTO framework. NAFTA 2.0, a revision of the North American regional treaty, has been inked and is being debated in Congress. Nevertheless, efforts to use trade treaties to universally institutionalize some of neoliberalism’s worst abuses have not fared well in this millennium.

Twenty years later, it looks like the Seattle Ministerial will be remembered less as the WTO’s Woodstock than as its Waterloo.

“What’s wrong with the WTO? A guide to where the mines are buried”. Peter Costantini. November 2001.
http://users.speakeasy.net/~peterc/wtow/index.htm
A reference site on the WTO treaties and issues surrounding them