Ads about diamond-and-sapphire studded watches don’t turn me on. But this one gripped me. 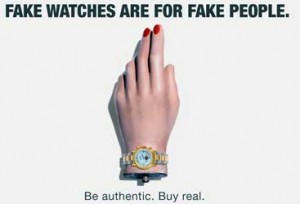 A screw-on  hand and the slogan:  “Fake watches are for fake people. Be authentic. Buy real.”

The ad is part of a campaign against counterfeiting launched by the Geneva-based Fondation de la Haute Horlogerie last month.

I might have ignored it but the day I saw it in a magazine, I had been interviewing amputees and photographing artificial limbs, not unlike the hand in the ad, for a story.

Ndozi Xhaudi is a 79-year-old grandmother from Botswana who got a prosthetic leg through an aid group in June.  For the first time in years, Xhaudi left the wheelchair and walked.

Tarina Coetzee, the physiotherapist who helped Xhaudi, recalls that it was her biggest dream to walk again. Now she could make tea and food for herself and be less of a burden on her family.

I spent time in Pretoria with Mohammad Saib, 13, who was born without legs. He goes to school, runs on the treadmill, and plays paintball thanks to his prostheses – you could call them fake limbs. 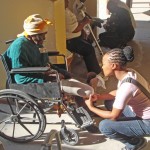 I stared at the ad.  How would Xhaudi and Saib feel about it?

I am sure the Fondation and its ad agency did not mean any disrespect. They probably never thought about a link between fake hands and real people with real needs.

This is part of the problem: the invisibility of people with disabilities.

Even the Millennium Development Goals forgot them, says the International Disability and Development Consortium. Disability is not included in MDG indicators and targets, although it affects all eight MDGs (see their slideshow).

This is not as surprising as it sounds. Disabled people consistently face discrimination and disadvantage. Eight out of ten live below the poverty line. One in five of the world’s poorest people are disabled, says the Consortium.

The World Bank estimates there are 300 million women with disabilities, and most live in poor countries. Moreover, women are the main carers of the disabled.

Besides disease, landmines and cluster bombs maim people. So do blood diamonds. In Sierra Leone’s diamond-fueled civil war, rebels hacked people’s arm at the elbow or the shoulder. They offered their victims a choice between  “short sleeve or long sleeve”.

Last November, a fake (truly fake) satirical ad about blood diamonds annoyed South African diamond De Beers so much it tried to force the web provider to take down the offending website, which featured a hilarious spoof of the New York Times published on line and in print by a group of artists.

In the fake ad, a white female hand with a glittering diamond ring reaches out to a black prosthetic hand. The punch line: Your diamond purchase will enable De Beers “to donate a prosthetic for an African whose hand was lost in diamond conflicts.”  See it here.

I have a friend who covered the civil war in Sierra Leone. Up to this day she can’t look at shops that have mannequins without arms. “My friends think I’m weird,” she says.

I don’t. I think she is sensitive to other realities far away from expensive, status-symbol watches and jewelry stores.

(Read about people with disabilities in Argentina, India and Tanzania.)