Warning: Creating default object from empty value in /home/gssn/public_html/ipsorg/blog/ips/wp-content/themes/platform/admin/class.options.metapanel.php on line 49
 Soccer, xenophobia and masculinities | IPS Writers in the Blogosphere

Can u Talk? Cellphones and Girls in South Africa Fake watches, artificial limbs and real needs 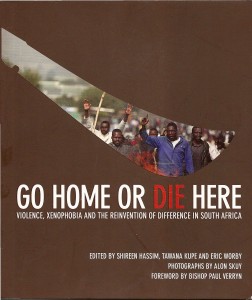 When friends ask me about the World Soccer Cup in South Africa in June 2010, I say there is only one if, but a big if.

What if another wave of xenophobic violence unfurled, like the one that shook South Africa to the core a year ago? It left 50 dead and about 150,000 displaced, terrified and destitute immigrants – black, African and foreign. (Click here to see a slideshow)

The army stepped in and the violence subsided. But xenophobia still simmers. In June, IPS reported on yet more murders of Somalis in the Western Cape province. These are so common – 52 in 2008 – they don’t even make national news.  Only a really gruesome murder of Somalis – a mother and her children killed and dismembered in their spaza shop last year – makes the front page. Otherwise, murdered Somalis earn only a short news item.

Zimbabweans, Congolese, Tanzanian, Ethiopians and Bangladeshis were also murdered this year – shot, burnt alive, and pushed off a sixth floor from Durban to Cape Town.

“Violence against foreigners is rapidly becoming fully integrated into the standard politics of some townships,” Loren Landau, director of the University of the Witwatersrand’s Forced Migration Studies Programme, told IPS.

A recent report by the Consortium for Refugees and Migrants in South Africa notes that there were no convictions for rape and murder committed during the 2008 attacks, sending a message of impunity.

The report “Protecting refugees, asylum seekers and immigrants in South Africa” says there is little reason to believe that attacks against “outsiders” will not happen again.

For now, the country is in honeymoon period with the new government elected in April on a platform of service delivery and job creation, topped with the success of the soccer Confederations Cup in June.

But if disappointment over unmet expectations coupled with recession sets in, frustration could turn into xenophobic violence.

Earlier this year, an insightful and distressing collection of essays, “Go Home or Die Here”, analysed the 2008 attacks.

From a gender perspective, the authors argue that “negrophobic xenophobia is couched as a battle between two sets of men. (…) the anxieties provoked by economic exclusion and social fragmentation have found expression in violent masculinities, in which weapons are an extension of maleness, and women are no more than bodies to be possessed.”

The striking photos by Alon Skuy  illustrate this point. Most are men – rioters armed with sticks and machetes, rifle-toting policemen, bloodied corpses. The few women are at camps for the displaced.

The book’s graphic layout is so sleek that I found it disturbing – a coffee table book on xenophobia? It is borderline with the glamorisation of violence – the  gold light bathed photos of angry young men grinning as they chase hapless foreigners.

The photos gave me the same eerie feeling I had in the cholera camps of Goma, in the aftermath of the Rwandan genocide in 1994. Talking to genocidaires, I felt in them pure hatred and a taste for violence. “The problem is that we didn’t kill all the Tutsi cockroaches,” one told me.

The Consortium report notes that “rumours of groups mobilising to finish the job started in May 2008 (…) may easily lead to further violence and displacement”.

If that happens, don’t expect many Africans to come watch soccer in South Africa in 2010.