Warning: Creating default object from empty value in /home/gssn/public_html/ipsorg/blog/ips/wp-content/themes/platform/admin/class.options.metapanel.php on line 49
 The Hindu Right and Press Freedom in India | IPS Writers in the Blogosphere

“Operation West End“ – a sting carried out by two young journalists commissioned by the news site Tehelka (which literally means ‘sensation’) – changed the landscape of investigative journalism in India.

One hundred hours of footage and nearly $23,000 worth of bribes later, the public became privy to the rot at the core of the country’s political sphere: where high-level officials allowed themselves to be caught on tape accepting wads of cash in exchange for arms deals with Tehelka’s fictitious Regent Street-based weapons manufacturer ‘West End’.

Among those exposed by the sting operation were Bharatiya Janata Party (BJP) President Bangaru Laxman, Samata Party President Jaya Jaitley, and Brajesh Mishra, who at the time was serving as the National Security to then Prime Minister Atal Bihari Vajpayee.

Those familiar with the politics of the Hindu right wing recognized that these were not men who would take criticism lightly. Death threats came thick and fast to the doorstep of founding editor Tarun Tejpal. Tehelka’s investors were put behind bars. Police officers dug through the website’s coffers in search of any anomaly that would justify silencing the outspoken crew.

An office of 104 was reduced to just four in a matter of months.

But the ramparts of India’s free press held strong. The website re-launched as a magazine and became one of the loudest voices in the shrinking space of liberal, left-of-center debate.

Though the politicians were eventually forced to suspend their attack on Tehelka, the magazine’s insistence on exposing corruption and criminality within the ranks of the BJP kept the old grudge alive.

Today, 13 years after Operation West End – with Tejpal incarcerated in a Goa prison and the magazine whittled down to about 1/8 its former size – India’s media world is seeing just how deep the vendetta goes.

If your questions lies in the realm of “how and why” this happened, the answers can only be found in the worrying currents that are lapping at the foundation of the country’s fourth estate: the power and influence of the Hindu right.

Tejpal today stands accused of sexually assaulting a colleague at an event hosted annually by the magazine in the Western state of Goa. The case is based on several emails leaked to the press by the alleged victim, and Tejpal’s own decision (also leaked to the press) to step down from his position as editor-in-chief following the accusation.

The facts surrounding the case are heavily disputed. Tejpal has denied the allegation, while his former colleague stands firm that the incident amounted to rape under India’s revised penal code. CCTV footage from the night in question has yet to be released to the public. 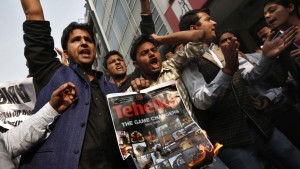 What cannot be disputed is the Indian government’s swift reaction to this case, with the police breaking rest until Tejpal was behind bars.

But in the hubbub of the high-profile sex scandal, few have asked how a country usually so slow to respond to violations of women’s health and safety (let us never forget Jyoti Singh Pandey, who lay naked and battered on the side of a Delhi highway for several hours before anyone came to her aid) has been roused from its stupor to tackle this particular incident

Those who do ask are finding, as “Operation West End” found, the rot.

Arun Jaitley was the first person to name the incident a rape – not the alleged victim, not a judge nor medical officer, but a prominent politician with the BJP.

The first public address calling for Tejpal’s arrest was arranged by Meenakshi Lekhi – not a women’s rights activist, nor a police representative, but the spokesperson for the BJP.

Who first gloated, before Indian national media, that this incident would spell the end of Tehelka? Not media analysts or experts, but Bangaru Laxman, former BJP president, and the very same man who was caught on tape during Operation West End.

Meanwhile, Jaya Jaitley, whose name you will recall from the beginning of this piece, has used the media scandal as a platform from which to denounce the validity of Operation West End and its findings.

Few newsrooms have stitched these details together in a coherent narrative. Most are either reporting from outside the courtroom or from the lofty platform of women’s rights, where Tejpal has been branded guilty until proven innocent.

If the BJP’s crusade against Tehelka has been lost in the headlines about the entire episode, the Goa police have had an even better deal. Save for a lone article in the Times of India, no mention has been made of the hundreds of unsolved crimes simmering in the very state that hastened to open the gates of its Vasco jail to Tejpal.

Ironically, it was here, in Vasco, where a schoolgirl was raped in early 2013. The perpetrator, though identified, got away scot-free, joining the ranks of scores of thieves, rapists and gangsters who have evaded the local police force all year. Even the murders of local tourists and foreign nationals did not elicit the prompt police action that followed the case against Tejpal.

Goa’s Chief Minister Manohar Parrikar, otherwise known as the man holding the state’s purse strings and prison keys, also heppens to be a proud member of the BJP.

Pundits have painted what is now dubbed the ‘Tejpal/Tehelka Scandal’ as a victory for Indian women. A young journalist makes a stand for her rights, and presto – the accused is clapped in a cell. The world is safe once more.

But when politicians are able to seize upon and manipulate an incident of this nature to fulfill forgotten ends, the world is not safe. A magazine that was once a beacon is singing a swan song, and no one is asking about the hooded figures dancing on the freshly dug earth of its grave.