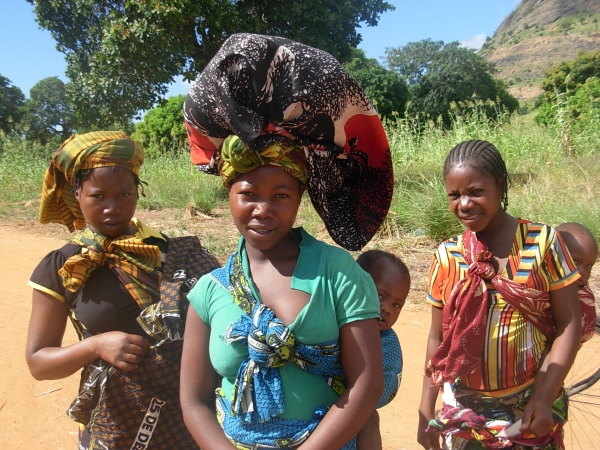 Young mothers: In Cabo Delgado province, by age 15, one out of three girls is married. Credit: Mercedes Sayagues

At every clinic we ask about women with obstetric fistula and we are told there are none. Only the director of Mueda town’s hospital, Carlos Alberto Sitoe, reports three cases in  2011. Yet Dr Marilena Urso, an ob-gyn with the Spanish group Médicos del Mundo, and I know this must be wrong.

Mueda district must be, as doctors here say, “a fistula factory”, from the combination of child marriage, bad roads, and poverty. Obstetric fistula is a lesion that occurs during complicated labor without proper medical care. Poor, rural young mothers are most at risk – and there are plenty in this Mozambican spot.

We also know that, ashamed of incontinence and unaware it is treatable, fistula sufferers stay home, shunning social contact. They don’t come to the clinic. Watch Alzira’s moving story.

No information campaign about fistula prevention and treatment has ever taken place in Cabo Delgado. This is a neglected health issue that only recently is getting national attention – although it affects some 100,000 women. See this audio slideshow.

For a brochure on obstetric fistula I produced in 2011, I interviewed Dr. Silva Macoquera. When he arrived in Buzi district, in Sofala province, 14 years ago, he was surprised at not seeing fistula patients at the clinic.

Yet isolated Buzi, like Mueda, had all the reasons to be a fistula factory. One day, Silva described the symptoms to a regulo or traditional chief. Before sunset, the regulo had identified 20 women with fistula who kept out of view in their huts. “The regulos hold they key to women’s health,” Silva told me.

So we persist with our question. The third day we visit Namatil, on the border with Tanzania. The traditional midwife, Fatima Amissi Usange, 40, has never heard of obstetric fistula. But she knows someone who urinates constantly after a long labor: her daughter.

Pregnant at 16, after several days of labor at home the baby was born dead and she developed fistula. Her partner dumped her. “She seldom leaves the house and cries all day,” says Amissi. “I try to help washing clothes and buying soap, but I cannot cheer her up.”

We can. Amissi’s eyes lit up when we explain there is treatment and give her the brochure portraying young women who were cured through surgery.

We make a plan. The next fistula surgery session in the north will take place in Nampula province in mid-September 2012. Medicos do Mundo drives from Mueda to Pemba (seven hours on a bad  road) every Friday. From Pemba, a flight to Nampula takes one hour.  Two other women with fistula from a nearby town will also go. We are sorting out this complicated logistical arrangement as I write.

The power of radio

I know the power of radio. Last May, after I trained a dozen radio journalists in the central provinces, a health reporter with Radio Mozambique did several programs on fistula in the local language Chi-Sena. Upon hearing it is treatable, four women boarded a bus in Nhamatanda straight to Beira Central Hospital, 100 kms away, where doctors operated them. Watch videoclip Walking to Freedom.

The Mueda reporters had never heard of fistula and were shocked – as everybody is when learning of the social exclusion and misery endured by women because nobody took them to a clinic in time for safe delivery.

Obstetric fistula is a prison where no woman should live, and journalists have a key to their jail.